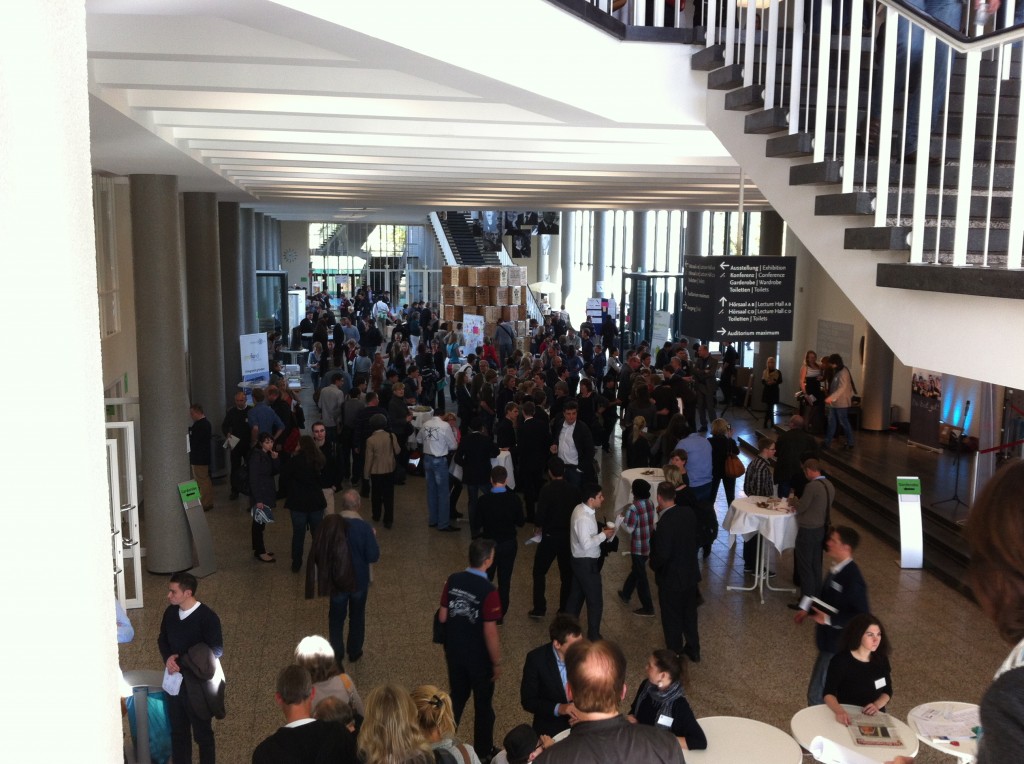 The Entrepreneurship Summit is a yearly event, initated by Prof. Faltin. The topic is, you might have guessed already, entrepreneurship all the way. I attended the event already last year and was impressed about the quality of the speakers and the talks. The speaker list in 2012 promised an exciting and interesting event as well, and included such names as Alexander Osterwalder and Frithjof Bergmann. So I decided to attend the summit also this year. I have to say that I was slightly disappointed. The keynotes were very good, as usual, but the quality of the so-called “impulse groups” was really low. At least the groups that I attended:

The gist of this talk was: You have define, measure and watch your KPIs closely, especially when you are just starting your business. Well, yes, that’s the whole point of lean startups: Watch your KPIs closely and change stuff when the figures don’t add up. Calculate the LTV (life time value) of your customers and the CAC (customaer aquisition costs) and see whether your revenue model really works. From a finance perspective, measure your burn rate, your “time to out of cash” and your “time to cash” – if you need fresh money. So, the  talk mainly stressed the importance of data driven business development. I’m a huge fan of data driven development and practice it permanently in my daily work, so there was little news for me. However, if you’re an entrepreneur which is in love with her idea, I hope this talk made clear that this is a very bad idea and that you should look at your figures and listen to what they have to say. Two projects have been mentioned that I want to share with you: First, Berlin Startup Inisghts, a project which dedicates to helping SMEs regarding their KPIs, business model and processes. At the moment they have only a facebook page. Another interesting project is the Startup Compass. These guys have collected KPI data from over 10,000 startups which you can view. You’re also able to benchmark your own data against the existing ones. The question is: Are there any common KPIs that can be applied to all internet based startups? I have not dug into their website a lot, but I will definitely try what they have to offer in the next days.

Summary: If you want to sell something, be it products or services, you first need to position your company and then come up with an interesting and emotional story. Don’t focus on how smart your product is or how your service is the best in the world. Forget all your awesome product attributes, think about what problem you solve for the customer (the old “job-to-be-done” mantra) and then wrap it up in a nice story. Then, set up a blog, but do not talk about products and services, but about the story you want to tell. Then do some SEO stuff and contact journalists of your choice (and be pushy!). Again, do not try to sell your product or service to the journalists, but a story. As an example one of the speakers talked about his own business, Strandschicht. Strandschicht is a german speaking pendant to getfriday, which offers virtual private assistants. Now, the founder did not talk about his company, but about the concept of virtual private assistants in general, which is still little known in Germany. That way he was able to place a huge story in the very popular news magazine “Der Spiegel”. While I agree with many of the things said, the talk was a little bit shallow. Blog, SEO, articles, all well and good, but this is not enough in my opinion. For example, getting a featured article in one magazine is great, but the effects of the publication, means people getting interested in your service, will vanish very soon. Then you’d have to place the next article, and so on. Judging from the speakers own experience on how difficult it is to get such an article, it sounds like a full-time job.

I was looking forward to this keynote a lot, since Alex Osterwalder is one of the guys that really pushed the whole business model thing forward. As expected, the keynote was fun, but unfortunately only 30 minutes. He talked about the Value Proposition Canvas, an addition to the Business Model Canvas he is famous for. First, take a close look at the job-to-be-done of your potential customers. The ask yourself, what are the gains the customer wants to achieve by doing this job, and what are the pains she has when doing the job. The latter can also refer to existing solutions on the market. Now design a product or service for the job-to-be-done and examine what it does to create gains and reduce pains. If you want to learn more, there’s a blog post from Alex Osterwalder dealing only with the Value Proposition Canvas. The canvas is a valuable addition to the Business Model Canvas, since it really focuses on your customers and how your company can help them to carry out their jobs-to-be-done. I admit that I am a huge fan of Peter Drucker, which also stressed the importance on focusing on your customer over and over again. So it will not surprise you that I enjoyed the keynote a lot. As a sidenote: Osterwalder did not prepare any slides, but accompanied his talk by scribbling the key concepts of his ideas live on his iPad. Due to a sudden push notification during the talk the audience also learned that his kids like Ice Age

This talk really really angered me. Not because I don’t care about environment or the human touch in the rough business world. No, the thing is that the topic of the talk was changed minutes before it started. I was expecting a totally different topic (I forgot the original title, shame on me) and was suddenly confronted with people trying to make the world a better place. Nothing wrong with that, but I felt deceived a little bit. I won’t go into the details of this talk, since I actually hated it.

Ah, that was actually a good talk for once. Eric Lynn and Hajo Winkler talked about coaching in general, and coaching for Entrepreneurs in particular. The question raised were:

Hajo Winkler founded the “Garage”, which provides coaching for entrepreneurs. He uses the “Hollywood Principle” (no, not the “don’t call us, we call you” thingy) in his coachings, means he films the coachees and provides them with a professionally produced and cut mini-movie which they can watch and enjoy even after the coaching is over. He also agrees with the customers on a fixed amount of coaching sessions early on (usually 7 if I understood him correctly) in order to kind of time-box the coaching program. I find both approaches meaningful. He was accompanied by Eric Lynn, who developed a self-coaching program called mylifeQs - short for my life questions. He stated that nearly every executive in bigger organizations has a coach, and for a reason. I would have liked to hear a little bit more about his coaching program, but the website provides a lot of material to dig into.

This is what I call an inspiring keynote. The topic was “Vom Glück des Gründens” (roughly “About the joy of founding”). Mr. Langenscheidt basically talked about that founding a company and thus doing your own thing provides joy that you won’t find as an employee. Now you might say that this is old news, and I agree. But while he talked about some venture he started many years back you could still see his excitement and the light in his eyes. His conclusion was that there is a joy and satisfaction in becoming an entrepreneur which cannot be found elsewhere. Well, I agree.

I had to leave this talk after 20 minutes or so. The room was overcrowded and there was so much noise from outside (thanks to all you people standing there and keeping the door open all the time) that I could not understand a thing. This again annoyed me a lot.

Development of a social game

Hm … I think I am partly to blame for this huge disappointment, but coming from the IT world, what should I have expected? Well, I expected a talk on social games in the sense of browser based games that I can play with my friends and colleagues. Boy was I wrong. The talk was about a board game which aim was to teach the players about ways to lower their carbon footprint. Again, nothing wrong with that, but, to put it mildly, the content of the talk did not quite match my expectations.

For me, there was too much talk about social aspects, sustainability and, yes, art. I went to the summit to get some inspiration and first-hand experiences of founders. I wanted to learn about new trends, tools and methods that came up in the last year. Something about how to find the right partners (ok, there was talk about that which I missed) for starting a business. Questions like: Do I really need VC to get started, or are there any other ways? And much more. I don’t know yet if I will attend the summit in 2013. I think I will purchase the ticket only after I have seen the complete speakers list and the topics of the speeches. This year, I blindly bought the ticket due to my excellent experiences last year.

The summit website features many videos from the event, so you can judge for yourself.

IT-nerd, business model addict and entrepreneur with 14 years business experience. Until recently I worked as Director New Business for a European social network with more than 25 million users, at the moment I'm starting my own company. I hold an engineering degree from Fachhochschule Offenburg and an MBA from University Potsdam. My aim is to bridge the gap between technology and business.